Many different languages are spoken in India. There are about 15 officially recognised languages and many hundreds of other languages and dialects. Hindi is the official language and is spoken by half the population. As a result of its historical connection with Britain, English is still the linking language and is used in government offices, many areas of commerce and in many schools. English is often spoken between better-educated Indians and wherever you travel in India, you will find someone who speaks it.

The village of K V Kuppam has grown up along the road, and is larger than its neighbours. It has the secondary schools for the surrounding villages, and the market (called in Tamil a ‘Sanday’ but held on a Monday).

In K V Kuppam the children are taught English as their second language, and if they travel elsewhere in India they may only be able to communicate using English. As many have only a very rudimentary knowledge of English this is a great disadvantage to them. Because K V Kuppam is close to the border with the state of Andra Pradesh which is Telegu speaking, many people also speak Telegu.

The ‘original’ people of South India are small, dark skinned and predominantly Hindu. They are known as Dravidian. Prior to the British rule of India, the present state of Tamil Nadu was ruled by the Chola kings and Pandya kings. The present city of Chennai and its neighbouring towns like Mahabalipuram (also known as Mamallapuram) and Kanchipuram were ruled by Pallava kings.

Mahabalipuram, a sea resort about 25 miles from Madras, is famous for its shore temple  and caves full of Pallava style of stone architecture. 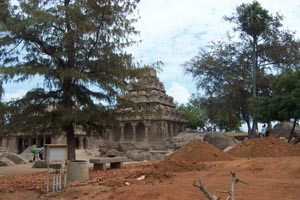 The Shore Temple at Mahabilipuram.

Tanjore, which was the capital of the Chola kings, is famous for the Brahadeeswarel temple depicting the Chola type architecture which is perhaps the ultimate sophisticated stone architecture, the most ornamental type of architecture. In fact the stone statues of women even depict the intricate ornaments worn by women of those days. The Brahadeeswarar Temple is so large that its shadow falls on it and never on the ground. It has a stone ‘Nandi’ (the bull) at the entrance which is the biggest in India.

Unlike the north Indian style of architecture, in the South Indian style the gateway of the temple (called ‘Gopuram’) is the highest point. The town of Madurai was the capital of the Pandya kings and it is famous for its Menakshi temple depicting the Pandya style of life and architecture. The temple is full of sets of seven stone pillars. Each pillar, when struck by an object, gives one of the seven swaras of Indian music called the ‘sapta swaras’ (seven swaras-meaning the octave leaving the last note).

The Menakshi temple dominates the town of Madurai.

One of the Gopura entrance towers at Menakshi Temple, Madurai.

Tamil Nadu was also the seat of Carnatic music and Bharata Natyam which is one of the oldest dance forms of India. In those days the temple was the focus of attention and cities were built around the temple. Kanchipuram, which has an important Hindu Temple, is still a centre for handloom silk weaving although competition from China is having an effect on the industry. 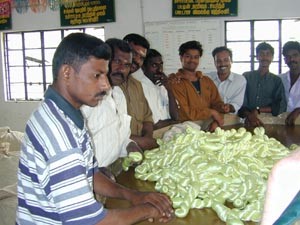 Back to K V Kuppam Menu