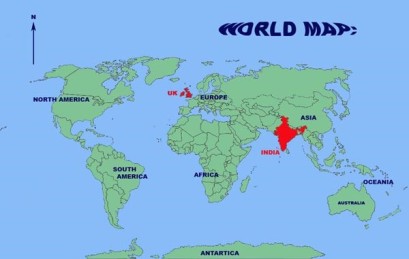 India, in South Asia, is a vast diamond of territory, 1900 miles from top to bottom and 1300 miles wide. The bottom half of the diamond is bordered in the south west by the Arabian Sea and in the south east by the Bay of Bengal. The north east side of the diamond is the Himalayan Mountains, part of which is the mountain state of Nepal. The northernmost point of India is Ladakh. Much of the North West side, the border with Pakistan, is the Great Indian Desert. Outside the diamond to the east is the north east frontier which is wrapped around the north of Bangladesh bordering Bhutan, Tibet and Burma. 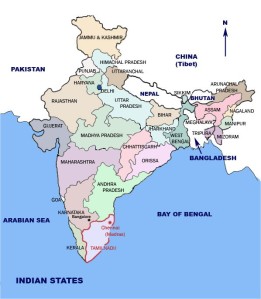 Tamil Nadu is one of the four southern states of India, the other three being Andhra Pradesh, Karnataka and Kerala. It is a coastal state as its eastern side is the Bay of Bengal. Its southernmost tip is also the southernmost tip of India, Kanyakumari, where there is a confluence of Arabian Sea, Indian Ocean and the Bay of Bengal. Chennai (formerly Madras) is the capital of Tamil Nadu and a major port. Tanjore and its surrounding areas are called the ‘rice bowl of Tamil Nadu’ because of the fertility of the soil and availability of water which makes it the best agricultural area. However many areas of Tamil Nadu suffer from lack of water and are dependent on water from rivers which start in other Indian states. 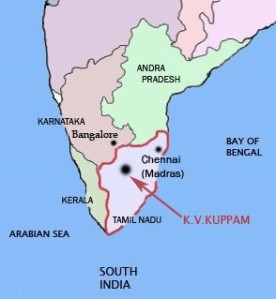 To find K V Kuppam, first find Chennai (Madras), about three quarters of the way down the south-east coastline of India, in Tamil Nadu. Go directly inland due west until you find Vellore which is the nearest large town to the village. If your map is detailed enough you will also be able to find a town called Gudiyattum, about 30 miles further west. K V Kuppam is on the main road between Vellore and Gudiyattum, almost exactly half way between the two. The railway line from Chennai to Bangalore runs, via Katpadi Junction, through the middle of the village. The road signs say Kilvayattanankuppam, but it’s referred to by everyone as K V Kuppam.

You might like to use Google Maps or Google Earth (Grid Ref: 12* 58’ 11.95’ N, 79* 08’11.52’ E) to locate Katpadi town near Vellore. Follow the road north to Katpadi Railway Junction. The railway line (and road) west runs through K V Kuppam, half way between Vellore and Gudiyattum. You may be able to work out approximately where the village is.

Can you find the Palar River?

Plan and cost out a trip to K V Kuppam. Where could you stay?

Back to K V Kuppam Menu