There are several different styles of houses in the village, depending on the wealth or poverty of the family. Many families live together in a large house, sometimes built around an inner courtyard. Usually a bride will go to live with her husband’s family. There are quite a number of concrete houses now in the village, owned by wealthier villagers. These have several rooms and a flat roof which has a tar covering to make it weather proof. Although such houses are a status symbol, they are by no means as comfortable as the traditional houses, because they become too hot. The smaller traditional houses are built of brick protected by mud. Traditionally the roof is thatched, with sugar cane leaves or rice stems, but if people can afford it they now prefer to have clay tiled roofs which last much longer than thatch. These are more expensive because they require a framework of wooden struts.

Most homes have very little furniture. People usually sleep on mats on the floor and on waking they roll up the mats and sweep out the room. Many houses have only one or two rooms.

Many of the houses have flat roofs.

Some houses are much simpler.

The simplest home, made of thatch with a mud floor gives very little protection from scorpions and snakes.

Some new houses are very grand!

A traditional brick and mud house with thatched roof, on the outskirts of the village.

Although India is changing very quickly in some respects, particularly in the cities, life in the K V Kuppam area is still very traditional. Most young people have an arranged marriage and in most cases the bride will then leave her family home and move in with her new husband’s family.

Love marriages, as they are called in K V Kuppam, are not popular with parents and some families choose to marry their daughters at a young age to a person of the same caste and social background, before they have time to form an attachment to a boy who may not be considered suitable. Young people do fall in love and some are allowed to marry but most families, including Christian families, will choose to arrange a marriage for their children. 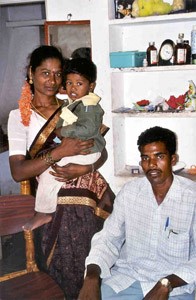 Uma is married to her uncle Rama.

Marrying within the family is a tradition amongst the large farming community in South India. Uma’s grandmother is Rama’s mother. By marrying a close relative the precious land remains within the family but research has shown that it increases the risk of children being born with disabilities.

Due to a good deal of government pressure more and more couples are reducing the size of their family. Boys are still sought after because they can support the family, whereas girls can be expensive, especially when it comes to paying for a marriage and providing a dowry for the groom’s family. Baby girls may be less well cared for than boys and diseases may not be spotted so quickly.

Nutrition may not be so good and parents with a low income may be reluctant to buy expensive drugs for their daughters.

Saraswati married to her uncle.

Women are encouraged to be sterilised after their second child so they don’t have more children. They are given a cash incentive for doing this and the government now provide a small dowry payment for the second child if it is a girl. This is to discourage female infanticide and seems to have been fairly, though not entirely, successful. Saraswati received a small dowry from the government for baby Nisha, when she agreed not to have more children.

In 1979 over 27% of children in K.V.Kuppam had some form of malnutrition but thanks to the Rural Unit of Health and Social Affairs, which was set up in 1977, this was very quickly reduced to around 3% due to the introduction of nutrition education through a network of local village women trained as Family Care Volunteers. When Priya and Nisha were born, Saraswati was given 12 simple and easy to remember pointers:

After the baby is born

Meet Alemelu and her family.

Read about Way of Life

Back to ‘Who lives there?’