Traditional handloom weaving in the K.V.Kuppam area usually takes place in the home. The whole family gets involved helping unravel the threads and winding bobbins and so on. It is done on very rustic wooden looms in people’s houses or sometimes in workplaces arranged by one of the weaver’s cooperatives in the village. Preparation of the warp for the weavers is a skilled process and is carried out in the streets of the weaving quarters in Seetharamanpet and Kamatchiammanpet. It takes a whole day to weave 2 metres of cloth.

The Tamil Nadu government sets the price per metre of handloom cotton but the system has traditionally been dominated by the Master Weavers who sell directly to the traders. They provide the raw materials to individual weavers who work on a piece rate system receiving a very low wage. In 2006 the Indian Central Government encouraged the formation of Self Help Groups within the villages which gave the weavers a little more autonomy.

In 2015 traditional hand loom weaving within the villages is in decline. Many of the weavers’ children have benefitted from higher education and are no longer interested in continuing the family tradition. The closure of the Bishopston Trading Company has also had an impact. There are still skilled tailors in K.V.Kuppam producing made to measure clothes and some tailors still work from home charging a small fee for making up clients’ fabric into sari blouses etc.

Fitting matchsticks into frames, as part of the match making process, requires nimble fingers and all the family will help at various times during the day. The rate paid by the factory is less than 2 rupees per frame.

Another local cottage industry is coir rope making. Coir comes from the coconut husk and families work with basic equipment to produce rope which is sold locally. The coconut tree has many uses and every part of the tree can be used in some way.

Balaji takes a day to weave 2 metres of cloth. He has recently joined a weaver’s self-help group. 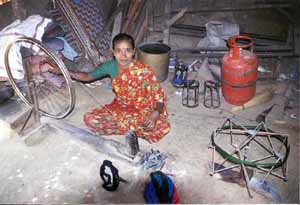 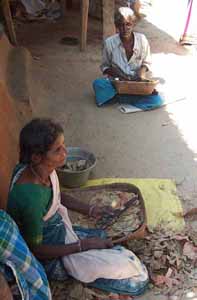 Part of the match making process is done at home before the matches are returned to factory for dipping in chemicals.

Amudha charges 12 to 15 rupees to make a sari blouse.

Back to Village Occupations