In Tamil Nadu the Indian Government has now made Nursery education available to most children. The local village nursery is called a Balwadi and private nursery education is known as Kindergarten.

The Government Balwadi (nursery) programme is an outcome of the recognition of the need to give children from the economically less privileged sections of society a good start in life, through play and social interaction. There is a Balwadi, now run by Government teachers who are not necessarily trained in learning through play, in almost every village in Tamil Nadu and also quite a number of them in the cities. The Balwadi in Tamil Nadu also have a noon meal scheme. 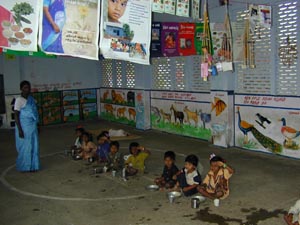 Although the walls of this government Balwadi are brightly painted most of the posters were targeted at mothers and there were very few toys available. Can you find the doll in this picture?

This private kindergarten is part of the Ida Scudder School in Vellore. The school is based on the UK system and children join UKJ at 4 years old. The children are taught in English and they learn the alphabet and numbers.

Private nurseries cost from about Rs 3000 per year upwards. Many families prefer their children to attend a Christian nursery as they feel the education is better there.

The children enjoy lunch after a morning of play activities in a Bishopston Link Balwadi.

The Bishopston Kuppam Friendship Link has worked for many years to develop nursery education based on learning through play, in the K. V. Kuppam area. The very first visitors who went from Bishopston in the early eighties noted that though there were some government ‘balwadi’ ( nursery groups), these were predominantly a means of distributing food to small children. It was not usual for any activities to take place which would have stimulated the children and indeed there were very few toys of any kind to be seen in the village.

It was in this context that three women from Bishopston went to K. V. Kuppam in 1991, to set up a small nursery school which was to be run as a place for children to play and to experience lots of different kinds of play materials. With the help of community workers from RUHSA, several young women were recruited to be trained in this way of teaching. Play things were designed and made by local carpenters, metal workers, potters and tailors from the Bishopston Trading Co.

The children practise their exercises with Jayanthi, one of the link trained nursery teachers.

The local carpenters show off the wooden blocks they made for the Link Balwadi.

In subsequent visits the teachers were given further training by the Bishopston visitors and several more small nursery schools were opened in villages around the edge of the Kuppam block. Ongoing support and training was provided over 15 years by the community officers of RUHSA, but in recent years the nurseries have been closed down because the government is now giving more money to villages in Tamil Nadu to set up and run balwadi which provide a play- based curriculum. 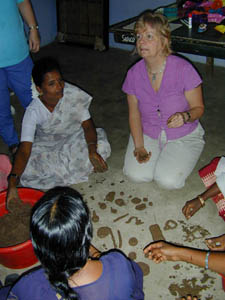 In 2008 Bishopston Kuppam Link (BTC) funded the purchase of land and the building of the Pachaikili Play Centre which serves the villages of Seetharamanpet and Kamatchiammanpet. In partnership with the Rural Unit for Health and Social Affairs training was given to the teachers by Sally Whittingham and the centre was opened by Dr Daleep Mukerji in 2009. In 2010 a centre for the elderly was added using a grant from The South Indian Rural Development Trust via the Bishopston Trading Company. This unique centre has been hugely successful and with the merger of BTC and Friends of Vellore in 2015 its future seems very bright.