Carolyn Whitwell is the designer and founder of Bishopston Trading Company, the UK Co-operative that sold women’s and children’s wear made in K.V.Kuppam. Carolyn had been involved with VSO in India when she was 21, and had become very interested in development education. In 1978, Carolyn and Sally Whittingham were both living in Bishopston in Bristol. Together they set up the twinning link with K.V.Kuppam and Bishopston.

As the secretary of the charity, Carolyn became aware of the real needs of the village. On a visit to South India the village leaders told her; “It’s not charity we want, it is work.” With this in mind she set out to start a trading company that would do just that.

Carolyn Whitwell was the driving force behind the success of the Trading Company.

After completing a business course at Bristol University, Carolyn together with her husband, two young children and a three month old baby, set off for India. She took with her some examples of clothes she had designed herself and met with the local tailors. After one month they had found a cutter, four tailors, a cleaner and a building for them all to work in producing clothes for a shop which had been leased on the Gloucester Road in Bishopston, Bristol. In 1985 the company was set up and funded through a £5,000 overdraft. Bishopston provided the skills of designing and marketing the clothing for the UK market and K.V.Kuppam provided the weaving and tailoring skills and the raw materials.

After one year the Trading Company (which was financially entirely separate from the Bishopston-Kuppam Link charity) was still heavily in debt. The greatest problem was actually exporting the clothes but after an exceptionally efficient export agent was found in Chennai things began to run more smoothly.

Despite many hurdles BTC became a worker’s co-operative in 1989 after breaking even. By 2007 the company had a part time staff of 37, four directors (of which Carolyn was one), a business turnover of over £870,000, five shops and 100 wholesale customers, including in Holland, New York and New Zealand as well as a mail order catalogue. 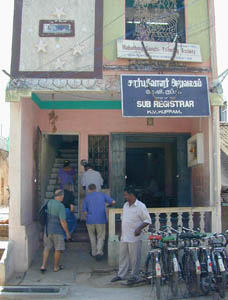 Until January 2006 the tailoring units were in small buildings throughout the village.

In K.V.Kuppam, BTC provided full time employment to 268 tailors, cutters, embroiderers, appliqué workers and support staff. The working day was 8 hours, 6 days a week; each employee received a fair wage and extra benefits such as gifts of money at festival times and on marriage, access to a provident fund and gratuity on retirement, holiday, casual and medical leave and an allowance for medical care and refreshments. In addition the company provided work for a further 300 handloom weavers. With the rise of the self-help groups the company was able to source handloom cotton directly from 98 weavers in 6 Self Help Groups, which enabled some of the weavers to pay off their debts to the Master Weavers.

Arul, seen here with his wife Uma, was a senior and much respected member of the Tailoring Society. He worked tirelessly to help local tailors and weavers set up their own Self Help Groups.

Any profit was used to help the community and some of the profits were channelled through a Trust in India to buy a plot of land and build model tailoring units on the outskirts of the village. This purpose built factory was inaugurated in January 2006, just over 20 years since Carolyn started the business. She described the opening of the factory as her proudest moment. “It was just fantastic, beyond what I’d ever expected. I’d had this idea of a little shop in Bishopston, something to make the link a reality-but the whole thing has got much, much bigger now.”

This successful co-operative in South India was run by the villagers for the villagers. None of the staff from the tailoring units were graduates from outside-they were all local people from the village, who left school at 15 or 16. As Carolyn says, “They ran it and they ran it very well”.

With a little bit of help from a remarkable woman. 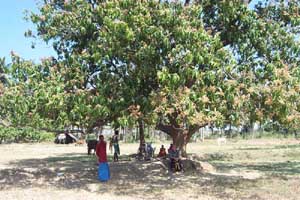 Land with a beautiful Mango tree in the centre was purchased for the new factory.

In late 2005 the beautiful and innovative architect designed factory was completed.

A message from Carolyn Whitwell 2013

It is with great regret and sadness that we have to say that, after 28 years in business, the Bishopston Trading Company closed down in August 2013.

The village of K.V.Kuppam, where our clothes have always been made, had seen huge changes. An entire generation had grown up since we started. All our workers’ children had been educated and very few were then seeking jobs as tailors, embroiderers or appliqué workers.

The problem was even more acute with our weavers. In 1985 we formed a partnership with a community of handloom weavers in the village. Weaving is a traditional craft skill, passed down within families. We helped pay for a scheme to enable weavers’ children to stay in school until they were 17 years old. Many have been able to go on to higher education. There are now not enough weavers in the area to keep up with the supplies that we needed.

While India has developed financially, Britain’s economy has been slow for five years, and this changed the buying habits of our customers. Our customers tended to be thoughtful, concerned, cautious people (as we were). They worried about the environment and over consumption and debt. They did not desert us but did buy less – this was particularly evident with our online customers. As we were no longer able to continue we wished to close down our business voluntarily and ethically and in an honourable way.

We would like to thank our loyal customers, in Britain and around the world, who supported us for many years.

Back to A Very Special Friendship