Diabetes is a major problem worldwide. In India, it has almost reached epidemic proportions. Some of its symptoms are very similar to leprosy, though it is not contagious. 78-year-old Vadivelu, father of six, lives with his oldest son’s family in a village about 12 km from the hospital. The house is built with brick walls and a concrete roof and has electricity and sanitation facilities. The family collect water, which is available, twice a week from the public tap and have three meals a day. Vadivelu has studied up to high school level.

His whole family is very much affected by diabetes. His third son had diabetes mellitus and had to have his leg amputated in a local hospital, but died two years later. His remaining five children: three sons and two daughters are married and live separately with their own families. Vadivelu’s wife also had diabetes and high blood pressure and died recently. He was not content just sitting at home so he took out a loan from the local government and runs a shop in which he sells biscuits, cool drinks and ropes. He manages to open the shop four days a week and earns £35 per month.

Vadivelu had pulmonary tuberculosis for which he had been treated previously at CMC. He was also taking regular medication for diabetes and hypertension. He had a small blister on the bottom of his left foot which burst. He was initially treated in a local hospital. Since there was no improvement, he came to see the doctors at the Community Health and Development (CHAD) Hospital. By then the ulcer had developed into an abscess, with a cavity extending to the heel. He was referred to CMC hospital for further treatment and was admitted. In the ward he was diagnosed as having a diabetic foot which required part of his foot to be amputated under spinal anaesthesia. He recovered post operatively on the ward with daily dressings and was discharged in a stable condition after four days in hospital. He was advised to continue the dressings at CHAD Hospital.

The cost of hospitalisation for his treatment came to £282. His sons contributed some money towards the hospital bill but they couldn’t afford the whole amount. As a result of the generous donation of one of our UK donors, Vadivelu was helped through the Person to Person scheme. 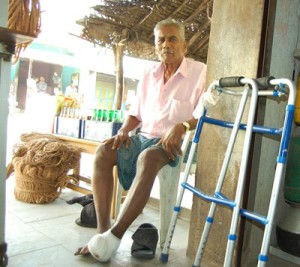